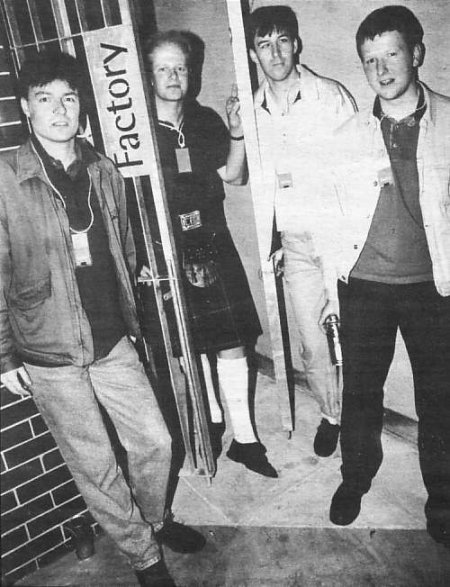 The Wendys outside Fac 251 Factory Headquarters

Now they are THE WENDYS, new Factory Records signing, and after The Wake the only Factory band from Scotland. They came to join Anthony H's brood after supporting The Happy Mondays In Scotland, where Shaun Ryder's dad Derek (a genuine and unsung helper of new bands) suggested that they send in a tape.

After three years of 'low key gigs'('low key' because 'no-one had heard of them') they became an item. The buzz was, erm, buzzing, and as usual the cynics in this world stood in a huddle and chanted 'Hype'. Only The Wendys aren't all pose; they have a distinct lack of trendiness, and some timeless, tireless, amiable pop-songs.

"Factory said almost straight away that they wanted to sign us," explains Ian. !Tony Wilson likes a man in a kilt," insists Johnny, who is of course wearing one. "Phil (Sachs, Factory A&R) was the first to be interested. After that everyone became interested. Now people hear our stuff and say it's the obvious choice."

The Wendys are one of the bands who have no obvious reference points to send them spinning and whirling into the nearest pigeon hole. Their manager describes them as a cheerful Joy Division. It's guitars..." (I wondered what those things were ...) "We do bits and bobs ..." adds Arthur.

Without wanting to be patronising (but doubtless being just that) the Scottish music scene is, well, odd. "It's not patronising, everything's influenced by the soul stuff from Glasgow; they all sound like Deacon Blue or The Shamen. There's nothing in between," answers Ian.

"At least the Edinburgh bands have the decency to be unlistenable," says Jonathan.

"And Glasgow's good because people drink a lot," smiles Johnny.

If this is the beginning for The Wendys, where will It end? "In the gutter," says Arthur, seriously. Ian explains:

"Hopefully in the charts. it's easier to get in these days, what with the Roses in again for no specific reason. If we can get in the charts, that's fine, but we wouldn't sell ourselves out. We're still playing the same music as we did two years ago, or three months ago."

Some bands at this level consist of clueless, pimply, sullen, teenagers; The Wendys are older, and mercifully wiser.

"Ian: In Edinburgh there's lots of bands getting signed to someone like Virgin, who'll probably swallow them up for a couple of years," says fan. At Factory, we've actually met and talked to people from the company."

Finally, the female staff of Factory begged me to ask what Johnny wore under his kilt.

In Scotland, men don't wear anything under their trousers. If you're a Scotsman, you've got to let it hang loose." 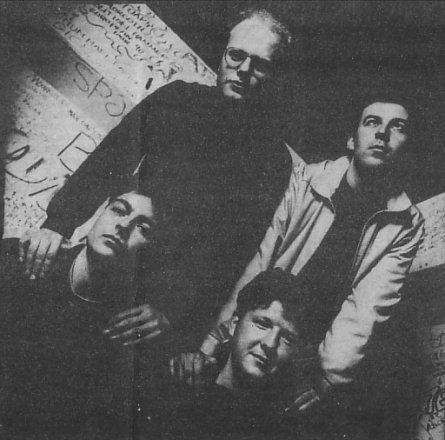 Keen golfers and new sound of young Scotland, THE WENDYS have got post-Mondays pop down to a tee. STEPHEN DALTON putts the questions to the funky Factory fore-piece and discovers their handicaps. Watching the birdy: HARRY BORDEN

Golf courses, mountains and castles scoot by as Edinburgh airport builds from a distant speck to a giant tarmac slab beneath us. The taxi driver babbles about his golfing handicap and childhood memories of Sean Connery. He hasn't heard of The Wendys.

Not much has come out of the Caledonian capital since Big Tam Connery swapped his lifeguard's trunk for Jimmy Bond's tuxedo. Various Bay City Rollers, Associates, Shop Assistants, Win and Finitribe hardly qualify the Athens of the North as Fun City.

Enter The Wendys, three years young and Factory's first signing since Northside. Bagged and now managed by Factory's A&R supremo Phil Saxe - also responsible for spotting and nurturing Happy Mondays - the Scottish four piece still exists in a new state/ They have no clear allies in the post-modern post-baggy post-mortem of '90s noise but are undeniably the first true post-Mondays pop group so far.

THE WENDYS were far enough away not to get sucked in by short-lived and self-defeating fashions. By the time any ripples from Madchester reached Edinburgh they were already enough - like Chinese whispers - to inspire a brilliantly bizarre Scottish hybrid, all gliding vocals and liquid spurts of melodic guitar.

Besides, as copper-topped drummer Johnny McArthur remarks, their musical roots evolved long before current trends. "We were probably more influenced by the same bands that influenced Happy Mondays."

Sardonic guitarist Ian White pinpoints the problem: "It's been obvious with a lot of press wanting to mention The Charlatans, Northside, Happy Mondays when they talk about our songs. If that's the way they want to do it, fine, but it's an easy option... we want to be known for the differences rather than the similarities."

The Wendys shambled together out of various jam sessions and party bands. Stuck with their crap name after a one-off concert, they found themselves square pegs in round holds, boggle-eyed singer Jonathan Renton recalls.

"When we first came to Edinburgh trying to start gigs, it was all completely different bands, from rockabilly to punk. We were totally different then and there's been nobody coming up since who's reasonably like us."

Watching Jon's jerks and gyrations during their powerful hometown performance, it is hardly surprising that no local challengers have responded to the tossed gauntlet. There is something arty and angular - like early James - about their gawky stage movements combined with the music's sturdy simplicity. All of which makes The Wendys a good pop band. But do they have bigger ambitions?

THE MOST endearing aspect of The Wendys might also be their undoing. They are ferociously ordinary, neither high-minded pop intellectuals nor prickly prole art threats. February's sleepy-voiced debut 'The Sun's Going To Shine For Me Soon' charmed its well oiled way into the indie charts - while slick sequel 'Pulling My Fingers Off' - is currently poised for a similar feat. But these songs must succeed on their own (considerable) merits: their creators are not about to become satanic street creatures, spewing quotable sound bites to titillate or outrage their way into the headlines.

"I got done for not wearing a seatbelt in Edinburgh last week," offers Johnny pathetically.

"We're all from working class backgrounds, even if our university education has conferred middle-class status on us," smirks bassist Arthur, Jonathan's brother.

All the band studied Electrical or Civil Engineering at university. They are justifiably proud od their education, despite its non-rock'n'roll implications. "Five years ago it wasn't rock'n'roll to be in a band that had just come off the dole, like the Mondays," explains Phil. "Let's face it, if you've got a big dick you don't hide it in the toilets, do you?"

Er... Ian takes up the baton. "We're all from normal backgrounds, my mum's a nurse, my dad's a joiner. There's no angle, none of us are religious. I really hate it when people go on about Catholics and Protestants and they are talking about what's down on somebody's birth certificate."

How old are the band, Jon?

"Altogether, we must be about a hundred."

Arf arf. But when Jon lists the band's hobbies as "dominoes and golf", he is deadly serious. Nobody jokes about golf with The Wendys around. Jon and Arthur come from a fanatical golfing family, are related to top ball-basher Bernard Gallagher and spend their spare time on the greens around Edidburgh.

"Jonathan and Arthur's parents are not going to be happy until they play a gig on Gleneagles," confirms Phil.

"The next interview is on the golf course," Jon concludes. Arise The Wendys, Britain's first post-Mondays band and swinging champions of the new club culture.

Letter from AHW to The Wendys

FAC 289 The Sun's Going To Shine For Me Soon

FAC 297 Pulling My Fingers Off