On the back cover of 'Hard to Swallow', a collection of comedy routines performed by John Dowie over the last six years, there's an immensely flattering photo of the man whose spiky talents and challenging material have been entertaining and enraging audiences since way back in the early '70s. Sex goddesses in glossy men's magazines only have their most intimate parts air-brushed. Here Dowie's had half his face removed. 'It looks very weird,' Dowie complains. 'They've removed all the acne scars and stubble. I guess the publishers wanted to make me look respectable. It's not like me at all.'

He's happier with the Hunt Emerson cartoons, strewn through the book. Like stylishly drawn graffiti, depicting Dowie as an unshaven, abnormally hairy, anxiety-ridden, hung-over beanpole figure thoroughly at odds with life. It's the personality he projects in his stage act. Hard-drinking, addicted to nicotine and scornful of social niceties, a bloke whose lover finds him 'as sexy as a tumour', a boozer whose brandy hangovers have convinced him that 'if something so evil is loose in the world then there must be a God', a human being for whom life is 'as funny as a lobster up my backside', a comedian who continually prowls the stage, grimacing as if in great pain, appalled at the fears and paranoia that accompany every waking moment. He's the stand-up who once said, echoing Samuel Beckett: 'What's the point? You're born, you walk about a bit and then you die. Waste of time, really, isn't it?'

Well, not quite. Dowie has developed a brand of humour that's unique, at least in comparison with his British counterparts, in that there's no way that slightly manic, always unpredictable, genuinely funny figure out there on the stage is just putting on an act. Many comedians draw on personal experiences. Dowie is entirely himself. It's an approach that's more dangerous, fascinating to behold, and capable at times of misfiring very badly.

Dowie himself admits he's been guilty in the past of putting audiences on edge right from the start 'by getting up there and rabbiting on about something that's just happened to piss me off'. When he's unhappy in any way, it tends to show. He's also been known to hit the bottle uncomfortably close to the kick-off.

The most notorious occasion was few years ago at the Edinburgh Festival. 'It was one of those awful Edinburgh days when you say to yourself at 11.30 in the morning "I'll just have a half". Then you continue to have halves till well past midnight. Another comedian, Pete McCarthy, tells a good story about how he found me that night, five minutes after the supposed start of my show, sitting in a bar with a cup of coffee in one hand and a double scotch in the other. A classic mistake for a comic. You feel funny until the lights hit you. I got through my hour. Obviously it wasn't of much value to anybody. I told them they should ask for their money back. But these things happen. It said on the posters something like "John Dowie - 8.30pm". It didn't say "John Dowie- 8.30pm. Sober".

Edinburgh was also the scene of Dowie's most unhappy excursion into acting. In 1984 he played Strindberg in a play about the celebrated Swedish misfit's life. 'Very few laughs in that. Another classic mistake - comedians thinking they can act. There's not much mileage in putting me in anything unless you want it to be funny.'

IN THE PAST Dowie has been sworn at and gobbed on, lie's long since learnt to dodge flying beer glasses and lie's been confronted by burly punters offering to perform impromptu surgery on his face with bottles of Newcastle Brown. This was mainly in the early days. He had a relatively gentle introduction to the rigours of life as a comedian 'doing amateurish bits and bobs in a little hippy enclave known as the Birmingham Arts Lab'. It was there that he first met Hunt Emerson. 'He came up and said "I'm your biggest fan". Funny, because he was only about four foot six. He gave me my first acid trip and we've never worked together since, not until this book.'

Spike Milligan's show 'The Bed-Sitting Room' was a big influence on Dowie at the time. Then, more predictably, a record containing some of Lenny Bruce's routines. Dowie had very long hair and 'something of a reputation in those days as quite an engaging personality'. He'd be cheerful and charming for a fair bit of the act 'and then suddenly rant for five minutes solid about whale shit'. He started a rock group called The Big Girl's Blouse, 'a kind of of pre-punk comedy band which did songs and sketches and monologues. We played the Rock Garden and trashed the stage when they wouldn't listen. Then The Sex Pistols came along. We packed it in. It would've been embarrassing taking the piss out of rock music by doing funny songs once that lot were around.'

There was a marriage and then removal from Birmingham to Bacup because his wife got a job in nearby Rochdale as a teacher. 'A boring little Lancashire town. I didn't realise places like that existed. It resembled the surface of the moon. I gave up performing for a couple of years.'

But he's been performing more or less continuously ever since. His ex-spouse has been immortalised in the line 'We looked at each other across a room full of people, our eyes met and she thought to herself: "One day I'm going to divorce that man"'. Most of Dowie's material is more obliquely autobiographical. 'What first changed my attitude was a song I wrote called 'Premature Ejaculation". Now it's fairly obvious where the idea for that first came from. The real eye-opener was when I discovered that, as a consequence of doing that song, it wasn't a problem any more. I've found that about lots of areas since then.'

It's arguable that a lot of stand-ups work on precisely that principle. With Dowie it's the transparent, naked, unavoidable honesty that counts. He's recently been working with that remarkable performer Roy Hutchins on the stage version of Heathcote Williams's poem 'Whale Nation', broadcast in the last few weeks both on radio and in a somewhat literal-minded version on TV. Dowie's the director, though characteristically he rejects the label. 'My only, much repeated, directorial note, has been "why not try walking round in a circle".'

Dowie himself reckons he's 'a lot less up and down' than he used to be. His drinking habits 'have changed .dramatically' and the serious slurping happens after gigs. Now 38, he's decided the trade he's been practising for so many years should be regarded as a career rather than a way of carving out a living. He's in a relationship that's 'constant and supportive'. And there's an 18-month-old son. 'It's a form of insurance for the future. I've 1 been doing baby material ever since Lucy's pregnancy. In the year 2005 I'll be able to do all the stuff about ageing minds and brittle bones based on my own experience, and at the same time I'll have all the in-depth, heartfelt insights into whatever 18-year-olds are getting up to then.'

In the meantime you'll have to content yourselves with hearing Dowie hold forth on food, dreams, drugs, politicians ('Very few are black, hardly any are women and only one in ten takes heroin - and they're supposed to represent the rest of us?'), cats and dogs, being fat (one of the few subjects on which he's not qualified to speak), the hypocrisy of the Catholic Church, the Paranormal (Why be afraid of the Unknown when the Known can be so terrifying?'), and much else. Most notably men's minds. The song that goes 'I stink like an ape / I make jokes about rape / I'm a man'. And, of course, Man's obsession with sex. Then the absurdities of pornography. All that perverse attention paid to the whole business when men's orgasms are only marginally slower than a sneeze.

So it's in no way bizarre that a comedian who resembles Jasper Carrott's ugly brother, who stomps round the stage in a passable imitation of a nineteenth-century barnstormer playing Richard Ill, who pounds the piano like he's seeking revenge for some childhood trauma, who works in loads of songs despite the fact that on his own admission he can't sing, who never seems to curry favour with any audience, should strike so many people as the best of what's a highly talented bunch of comics nowadays.

John Dowie's 'Hard to Swallow, illustrated by Hunt Emerson, is published by Knockabout this week. His one-man show of the same name can be seen at the Canal Cafe Theatre from Friday. 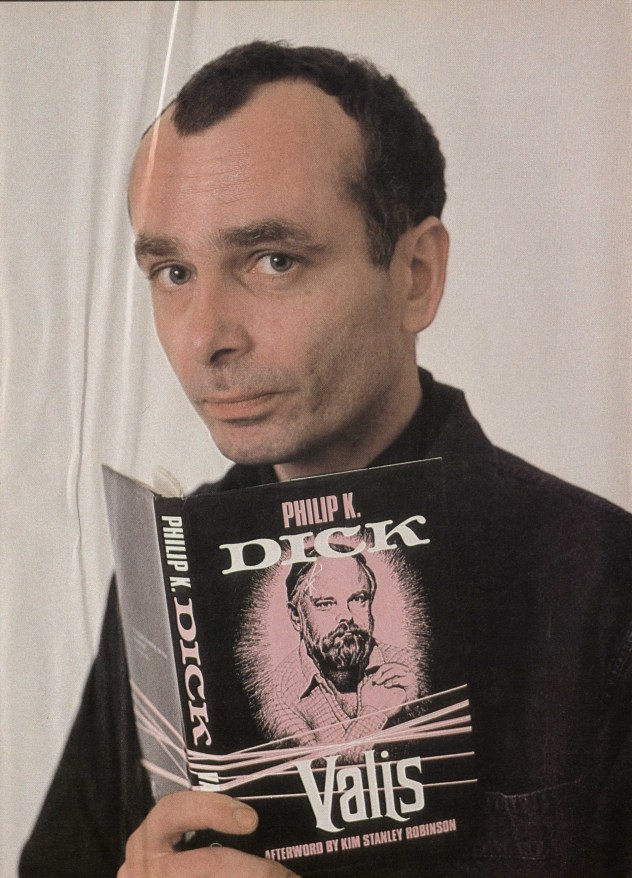