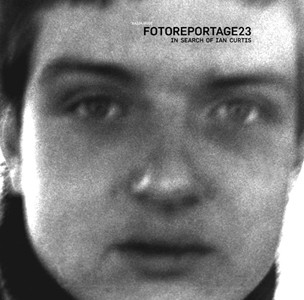 Fotoreportage23 - In Search of Ian Curtis is a new book out on 7 December 2007 by Katja Ruge. A photographic mapping of the places in the story of Joy Division and their singer Ian Curtis and the space he left behind. With contributions from people who knew him, worked with him, or were just inspired by him and the music the band created. Pictures by Katja Ruge and words from, amongst others: Peter Saville, Mark E. Smith, Jarvis Cocker, Phoenix, The Rapture, Karl Bartos, Genesis P. Orridge, Annik Honore, Lindsay Reade, Maximo Park, Terry Mason, Bloc Party, Jose Gonzalez, Nouvelle Vague, Mogwai, Johnny Marr, She Wants Revenge, Anja Huwe (Xmal Deutschland), Karl Hyde / Underworld and the late Tony Wilson.

The book is dedicated to Anthony H. Wilson and Katja, who was once photographic assisntant to Peter Walsh, exhibited the photos at A Factory Night (Once Again) in Brussells, Belgium on 15 December 2007.