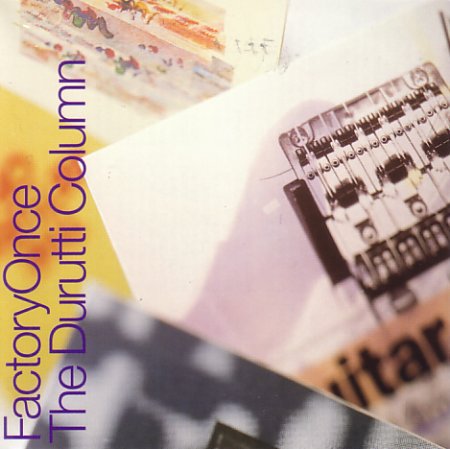 FACDO 204 The Guitar and Other Machines; front cover detail

Arpeggiator
What Is It to Me (Woman)
Red Shoes
Jongleur Grey
When the World
U.S.P.
Bordeaux Sequence
Pol in B
English Landscape Tradition
Miss Haymes
Don't Think You're Funny

The Guitar and Other Machines written and arranged by Vini Reilly. 'Arpeggiator' by Reilly and Mitchell. 'English Landscape Tradition' by Reilly and Metcalfe. Produced by Stephen Street.

Published by The Movement of the 24th January Publishing/ Zomba Publishing. A Factory Communications Record 1988.

Vini Reilly: Guitar, Keyboards, Machine Programs and Vocals. Bruce Mitchell: Drum Kit, Xylophone and DX Machine. John Metcalfe: Viola and Percussion on 'When the World'. Stephen Street: Bass Guitar on 'English Landscape Tradition'. Rob Gray: Mouth Organ on 'What Is It to Me' and 'Jongleur Grey'. Stanton Miranda: Vocals on 'When the World' and 'Red Shoes'. Pol: Vocals on'When the World', 'Red Shoes' and 'Bordeaux Sequence'.

Special thanks to Simply Red/ Elektra for Tim Kellet's trumpet on 'When the World'.

Published by the Movement of 24th January Publishing/ Copyright Control.

Not that yellow, Vincent

Things were changing aqain. The incredible four-piece which added Cor Anglais and Viola to Vini and Bruce had seen it's most perfect expression in the Japanese gigs ('Domo Arigato') and three memorable nights at the Electric Cinema in London's Notting Hill Gate.

Another crossroads. Tim Kellett went off to join Simply Red and young Metcalfe got buried in his two classical projects, the Duke Quartet and the Kreisler Orchestra.

And then Vini had some new technology thrust upon him. Bruce sometimes describes the way Vini's other manager treats Vin as being like watching someone peering over Van Gogh's shoulder and shouting, no not that yellow, you click... this yellow". Now Vini was no stranger to tech stuff - so much of his sound comes from the harmonic sex between his guitar and his delay machine.

But the world of machines that Martin Hannett had introduced Vini to in 1979 had moved on apace. In our family, New Order were in the forefront of the Sequencer Revolution; it somehow seemed really important what was it, the first instrument that truly played melody and rhythm in the same notation fuck knows.

Anyway Vini was handed a Yamaha Sequencer and a DMX Drum Machine. And told to do something with it.

Actually it wasn't quite like that. He was asked if he fancied it, and just to hang out with the equipment in case he found something flowing from it. Admittedly the tragic genius kept like a battery hen and fed shit and instructions makes better reading. But the kid does go his own way. Whatever, the cardboard boxes arrived with the goodies and it was duck to water; as in things really flowing.

On tracks like 'Arpeggiator' and ii was clear the Durutti Column had found another exhilarating avenue. And for all the technology, Metcalfe's viola and Bruce's drums were still on the most moving form.

'LFO Mod'. a rare piece which was done specially for Valuable Passages' a US release on Relativity and not put on the European version, is one of Vini's favourite pieces from this period and displays the 'sequencer revolution' at its most advanced stage prior to 'Vini Reilly' the next work.

And Simon came back from Brooklyn where he was either teaching or learning timbales, can't quite remember which. A couple of days at 'Out of the Blue' with Stuart James and Nick Garside brought the gang together, with ACR Jes on vocals and audio-scratching. 'Dream Topping' says it all.

This period also saw the Durutti Column at WOMAD, exquisite performances which we couldn't leave off this CD. Our favourite pianist, Swing out Andy Connell is on Keyboards and Liu Sola a chinese lady opera writer is the vocalist on the WOMAD stage, and has never actually explained what she was singing.

With thanks to Tony, Bruce. With love to Rachel.