Books > You're Entitled To An Opinion - The High Times and Many Lives of Tony Wilson, Factory Records and The Hacienda by David Nolan 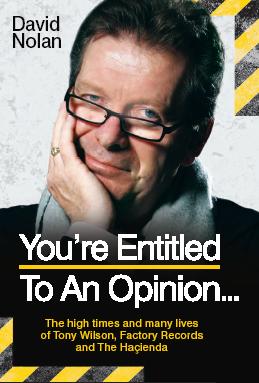 You're Entitled To An Opinion - The High Times and Many Lives of Tony Wilson, Factory Records and The Hacienda by David Nolan; front cover detail

Tony Wilson was the co-founder of Factory Records and The Hacienda, he kick-started the careers of Joy Division, Happy Mondays and New Order, he put the Sex Pistols on television for the first time and was the inspiration behind the film 24 Hour Party People. From his unique childhood growing up with a gay father and a domineering mother to his tragically early death in 2007 after battling the NHS for a drug that could prolong his life, David Nolan investigates the lives and times of the man they called 'Mr Manchester'. Drawing on nearly 50 interviews with musicians, DJs, writers, actors, family and friends - including Wilson's partner of 17 years Yvette Livesey - You're Entitled To An Opinion...paints a picture of a unique, driven and chaotic man whose inspiration and influence is still being felt today across the worlds of music and television.

Steeped in the chaotic swirl of the Manchester music scene, David Nolan is the critically acclaimed author of Bernard Sumner: Confusion and I Swear I Was There: The Gig That Changed The World. He's also an award-winning former Granada TV producer with 150 television credits to his name including documentaries on the Sex Pistols, The Smiths and Echo and the Bunneymen.

Features more than 40 interviewees, covers all aspects of Tony's life and career and was written with the co-operation of Tony's partner Yvette Livesey.