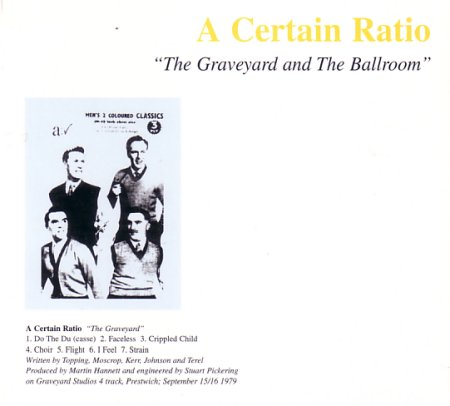 US CD20 The Graveyard and the Ballroom; front cover detail

A Certain Ratio's first album has been re-released on compact disc and vinyl by SoulJazz Records / Sounds of the Universe who were responsible for the band's compilation 'Early'. It appears, despite the distinct lack of information on the packaging, that the album was sourced from the original master tapes. Of course, there was no original vinyl to work from, because first time round it was only available on cassette. ACR diehards will know that in the intervening period between the original release and now there was a cd release on Creation / Revola and the Factory box cassette version. Opinions seem to vary but the general consensus amongst the cognoscenti seems to be that the sound quality is better on the Creation / Revola version.

Issues of sound quality aside, the packaging is a decent job which uses images from the cassette release. Added value comes from the two extra tracks. Hardly an essential purchase if you own any of the previous versions (except if you've only got an original FACT 16 and you don't want to mess the tape and/or your tape player up) but a worthy addition to the collection of a devotee.