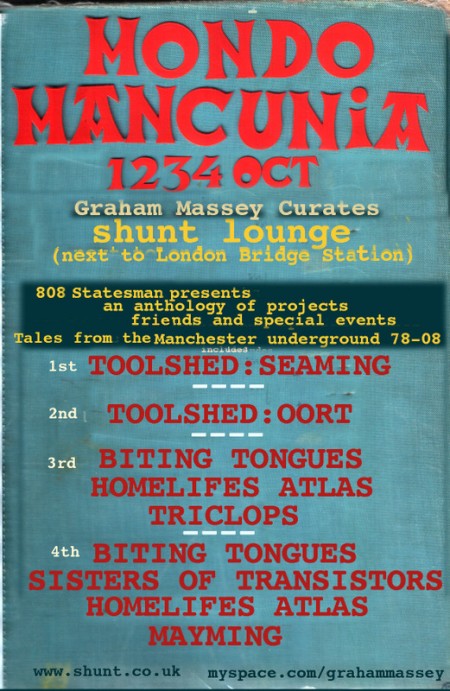 Graham Massey presents 'Mondo Mancunia' at the Shunt Lounge in London on 1-4 October 2008.

'Never go back to a lit firework,' Graham Massey reminds us in these days of faked special effects and dubious digital spectacle. From his days with Biting Tongues he still maintains the concept of live performance as an information explosion, with the group functioning as an experimental audiovisual laboratory at the centre of it. 'It's about what happens when you don't stop,' he explains. 'Biting Tongues was a media whirlwind, shredding sound before digital effects came in, cutting up texts and chants before rapping. We rewrote the rulebook but forgot to tell anyone. That's why Biting Tongues is still the band we never quite understood but could never quite leave alone.'

What began with Biting Tongues, however, has continued with Massey's other projects: from 808 State to The Sisters of Transistors, from Tool Shed to Massonix. Presented together over four days between October 1 to 4 at the Shunt Vault, alongside a whole range of friends, collaborators and kindred spirits, are various stages of a live tradition of deeply committed, full-force performances, shards and trajectories from the original information explosion. This is a unique opportunity to witness moments of secret transmission, a live line of descent that continues to this day. Supported by DJ sets, installations, lectures, screenings and seminars, Mondo Mancunia is about to rewrite the rulebook yet again 'only this time we're telling everyone,' Massey adds, 'so there's no excuse if you miss it.'

Spoken word / audiovisual piece written by Ken Hollings and Graham Massey in 2005: Martin Denny s 1950 s Exotica band recreated by members of Toolshed. 'We rob ourselves of paradise by our very presence there: to see it with our own eyes is to see it vanish before our eyes.'

Music written and performed by Seaming an electronica artist, songwriter and classically trained vocalist. Known as the vocalist with Manchester acts Homelife and Toolshed and guest on several recent albums by Liela, Robert Wyatt, Herbaliser and Mr Scruff, tonight Seaming To is performing many new songs with her new band.

Formed accidentally as a 'house' band in Manchester's Northern Quarter club scene, Toolshed was the name of Graham Massey's monthly club night. Electronica acts such as Autechre, Mathew Herbert, Squarepusher and Kieren Hebden all came to play live sets. The Toolshed Allstars monthly sets grew from two people to a 28-piece orchestra at one point.

Centred around Massey's laptop and instrument collection, established MCR musicians such as Paddy Steer (Homelife),Richard Harrison (Spaceheads) and jazz violinist Graham Clark (Gong) were joined by newcomers such as vocalist Seaming To and drummer James Ford.

A compendium of the project is available on Twisted Nerve Records as a double vinyl pack and CD.

'The release is too diverse to pigeonhole, without a hint of pretention either, it's as if Massey wanted to collate every piece of music he's ever heard into one complete package. He's pretty damn successful too. Music as good as this doesn't come about often, embrace it while you can.'

'The voodoo soundtrack created by the drummers is terrifying but exhilarating. This percussion force is crucial, blasting the band off from dance music. The other key component is the brass section, whose enormous stabs of melody ensure that no matter how weird the Allstars get - and they certainly get weird they are always orbiting around a killer tune. Everyone from avant jazzheads to techno kids should love them.'

DJs for the evening will be The Simonsounds.

Filmed nearly 70 years ago in a revolutionary new two-colour separation process, the Hollywood thriller Doctor X is a largely neglected film these days. Its title, however, has entered popular culture as a cipher for everything mysterious, secret and strange. Writer Ken Hollings, in collaboration with composer Graham Massey and filmmaker Howard Walmsley, uses mythically enlarged recollections of the original film to create retrofitted images of a totalitarian futuristic New York in which AC electricity is banned and 'radio psychics' are used in the detection of crimes. Examining electricity, crime, scientific inquiry and pathological behaviour, Dr X was originally commissioned for the Royal Institution event 'Electra: Electricity Culture' in 2004. This is a new expanded version created just for Mondo Mancunia.

"Born in the darkness of deep space, Oort have been creating glittering electronic spacescapes on Earth since 2006. With the bodies of Richard Guest, Zali Krishna, Mark Pilkington and Bruce Woolley, the voice of Ken Hollings, Oort have provided information and guidance on subjects ranging from the worship of their principle deity, Gojira, to issues of depravity and death in outer space. Their presentations have taken place at sites including the Camden Roundhouse, the ICA and the Bethnal Green Working Men's Club. Tonight, from their bunker city beneath London Bridge, they will employ their retro-futuristic oscillatory technology to illuminate passages from Ken Hollings' forthcoming study of weird science in the American Century 'Welcome to Mars'. Also featuring the ethereal sonic strangeness of Simon James, this is what the future used to sound like."

Welcome to Mars: Fantasies of Science in the American Century 1947-1959 is published by Strange Attractor Press this autumn.

The second half of the Toolshed residency: not a repeat performance of Wednesday night as a different line up will be in place.

The Lotta Continua label has been producing a steady stream of beautiful releases since 2001. There's a strong identity and approach to the music and artwork: think Throbbing Gristle if they were on ECM. Triclops is a Lotta Continua 'super group' comprising three of the label's artists in a car-boot sale electronic orchestra.

Paddy Steer and Anton Burns have now amassed a sizable back catalogue of releases under the moniker Homelife. It's almost a home recording experiment that grew into an orchestra, gathering in some of MCR's finest musicians, one by one, to create the work with a craftman's care. Then with equal attention to detail to recreate the music and take it on tour: a labour of love which continued for several years. Then at some point the red giant exploded into a white dwarf: Paddy, it seems, decided that he would play all the instruments at once. 'Madness!' I hear you say except; that this is what appears to be happening as he sits at the drum kit plays, bass with his feet and wields dozens of homemade instruments into some strange kinetic sculpture. Now a duo, Anton's song-writing has come to the fore, nicely balanced by the DIY approach to the instrumentation that keeps it more akin to outsider music than traditional song forms.

Emerging out of the dark days of post-punk Manchester, Biting Tongues represented an uncompromising attempt to blend electronics, text and dance beats to harsh and overwhelming effect. Renowned for their unique high-energy performances and experimental video projects, the band's original line-up featured writer Ken Hollings on vocals, multi-instrumentalist Graham Massey, filmmaker and saxophonist Howard Walmsley working together over the fiendish rhythm engine made up of Colin Seddon on bass and Eddie Sherwood on drums. In close collaboration with premier Manchester labels New Hormones and Factory Records, Biting Tongues recorded a series of album EP and 12 release as well as Feverhouse, their ambitious independent film project released on video by Factory Ikon.

In 2003 the original Biting Tongues reformed to perform selected shows at the ICA and Islington Mills, with Hollings, Massey and Walmsley working together on new audiovisual presentations such as 'Dr X' at the Royal Institution in London as well 'Ego In Exotica' and the 'Lonely Creatures' series of short films at the Green Room Theatre in Manchester. With their back catalogue available on CD, the band is currently enjoying some long overdue credit for their innovative pre-digital slicing and dicing of sound, text and vision. 'Effortless ferocity,' The Wire remarked of Biting Tongues' return to live performance, 'as exhilarating and as urgent as ever.'

"Graham Clark is one of the UK s leading improvising violinist. Combining Massey's electronic landscape with Clark's virtuoso playing, the duo has been performing together off and on since 1977 most recently at a sell-out show at the Manchester Jazz Festival."

Featuring Semay Wu ..o and electronics and Seaming To on vocals and electronics. The line between improvisation and lost songs from a past world blur whenever this duo start up their magic.

21:00 The Sisters of Transistors

"Fresh on the heels of their first single release 'The Don' the Sisters of Transistors are the UK's premier Ladies Combo Organ Quartet. Born from an eBay addiction to vintage Italian transistor organs, a hybrid form of prog-disco has been developed, while trying to fit function to the form. Described by Angry Ape as 'Giorgio Moroder's daughters running rampage with sequins and sequencers through a Dario Argento movie', the Sisters of Transistors are the ultimate Dark Party Band."

One final information explosion - hear everything in every dimension.

DJs for the night Liela Arab and Kelvin Brown

Event cancelled on 26 September 2008 according to Graham Massey's MySpace.