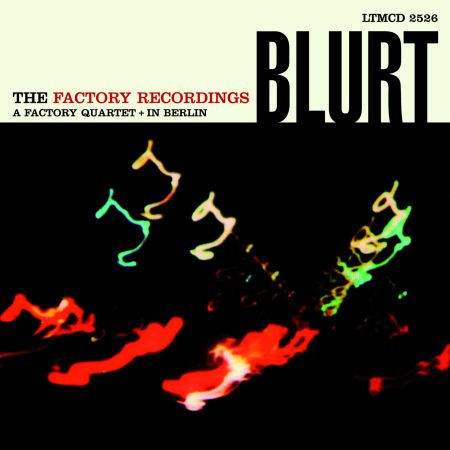 LTM is pleased to present an archive CD of recordings made in for the legendary Factory Records label by cult band Blurt, the unclassifiable punk-jazz trio led by Ted Milton.

Formed in Stroud in 1979, Blurt consisted of Ted Milton (sax, vocals), brother Jake Milton (drums) and guitarist Pete Creese. Ted had already attracted the attention of Factory founder Tony Wilson as a puppeteer (!), and were invited to join the label. Blurt performed at several Factory showcase gigs in London between April and August 1980, and recorded one side of the double compilation album A Factory Quartet (FACT 24).

Although their anarchic shows and music drew rave reviews, Blurt were frustrated by delays in releasing their Factory recording, and the last minute loss of a Factory tour of Europe in October. A live album, Live In Berlin, was recorded in December 1980 and scheduled for release as a 10" on Factory Benelux, but cancelled after Blurt annoyed Wilson by comparing the Factory label to lifestyle boutique Habitat. The set was subsequently released as In Berlin on Armageddon, its memorable cover featuring a photograph of a pile of pink rubbish sacks.

Digitally remastered, The Factory Recordings combines all tracks from A Factory Quartet and In Berlin, including Blurt favourites My Mother Was a Friend of an Enemy of the People, Ubu, Puppeteers of the World Unite and Cherry Blossom Polish. The booklet features archive images and detailed sleevenotes.

Ted Milton and Blurt still perform regularly in both Britain and Europe, and remain an undervalued national treasure.