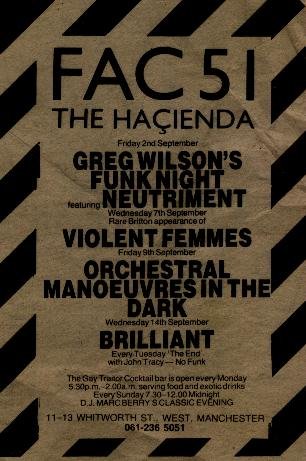 This is a list of 50 tracks that Greg played during his time at the club. Around the same time Greg did a mix for Piccadilly Radio, when he famously ran Rockers Revenge's 'Walking On Sunshine' over the top of New Order's 'Confused Beats' (this was re-created on the 'Viva Hacienda' (1997) album, but without any mention of where the idea had originated). There's also an edit of 'Blue Monday', also for Piccadilly, plus one of 52nd Street's 'Twice As Nice', but sadly the tape has perished.

Greg Wilson was the first DJ to host a specialist dance night at Fac 51 The Hacienda, in late 1983. He also played at Legend, to a mainly black audience. He also nearly made it onto the Factory catalogue at FAC 95 with a dance 12" single but this never happened. In a slight change of direction, the number FACT 95 is allocated to an album by The Royal Family and the Poor. Greg spoke to Cerysmatic Factory about his DJ times:

"Although I wasn't actually at The Hacienda for that long (Aug - Dec '83), my role, in hindsight, was to sow some seeds with regards to the clubs aspirations of attracting a more dance based audience. One thing that I feel was very important back then, but rarely mentioned, was the part that Broken Glass played in giving the club a degree of credibility with the black audience in the city. Later down the line, as both Mike Pickering and Laurent Garnier have acknowledged, the original pre-Rave House crowd at The Hacienda were mainly black (although, there's very little in terms of an explanation as to how the black kids began attending what was originally very much regarded as an alternative / indie club). Broken Glass were big news at The Hacienda in 83/84, pretty much becoming the clubs resident dance crew, and were held in very high regard until the breakdance overkill in the summer of '84 (they danced during Marcel King's number on The Tube). Anyway, I cover some of this ground in a piece I wrote for furious.com, a New York website a couple of years back."

"There's a lot of detail from this period that isn't generally known. I suppose that with the early years of The Hacienda proving to be such a struggle, most of the stuff that's written about the club places its focus, as you'd expect, on its subsequent success, skipping over its difficult early years. However, this has, unfortunately, obscured the true roots of Manchester dance culture, and the pivotal influence of the black scene."

Greg's unreleased dance 12" features as part of the great 'Undone' pantheon of Factory catalogue entries. Greg takes up the story: "I only realised I'd actually been given a Factory catalogue number, when somebody mentioned it to me last year - I think they'd come across it as a Factory trivia question. It was for a mix that I was going to do of stuff that had come out on the label. For one reason or another it never happened - most of the stuff I'd been given to work from was definitely not suitable for the type of mixes I was doing (I was a black music specialist), so, from my perspective it would have been trying to fit square pegs into round holes (only New Order, Quando Quango and 52nd Street had released dance singles on the label). Nowadays, with the assistance of computer programs, I'd have taken a completely different approach and could have put together something pretty interesting, but back then it was to have been a more straightforward one track into the next type mix."

Greg stopped DJing in 1984 but recently has been back on the decks, most notably when he supported A Certain Ratio at their Cargo gig back in August. He also DJed at a Hacienda Special with Graeme Park and Mike Pickering at Sankey's Soap in Manchester in March 2005. Check out the new radio mix 'No Sell Out', a Legend / Wigan Pier Electro Retrospective (May '82 - Dec '83) mixed by Greg Wilson for A Guy Called Gerald / Samurai FM. An mp3 is now available to download at samurai.fm.

Greg did an interview with Norman Cook (aka Fatboy Slim) for his website, www.electrofunkroots.co.uk. Norman, then Quentin, was a young DJ just starting out, and they met in Brighton during The Hacienda Review (a short tour of the South in Dec 83 featuring Broken Glass, Quando Quango and Greg). The following month he came to Manchester to watch The Tube, staying with Kermit out of Black Grape.

In 2009, Greg released Credit To The Edit Vol 2 on TIRK Records. 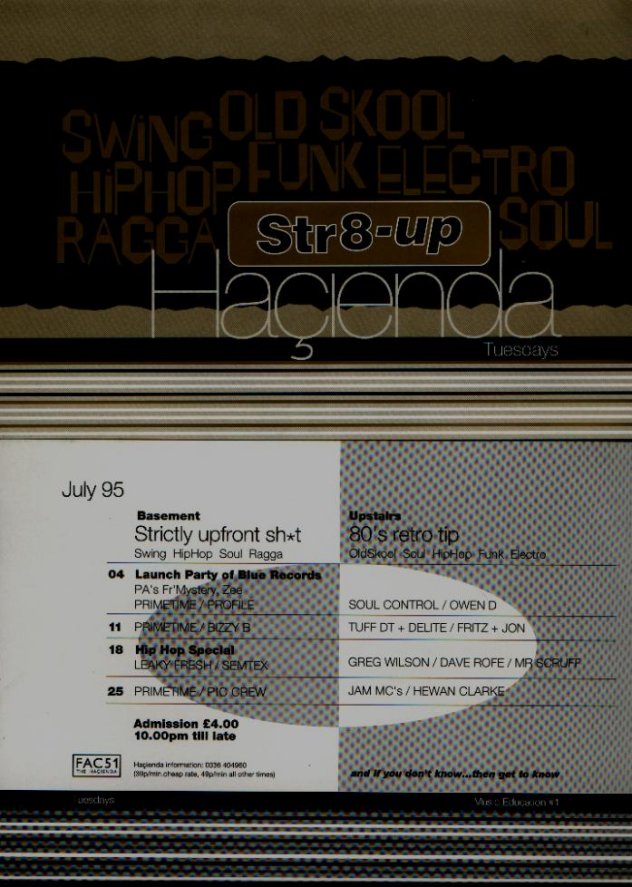 Fac 51 The Hacienda - Str8-up - July 1995; flyer detail - this is a flyer from '95 for an event that never happened. This would have been a rare DJ appearance for Greg Wilson as at the time he was 'retired'. However, the police wouldn't let the night go ahead. Note scheduled appearances by Dave Rofe (now manager of Doves) and Mr Scruff.