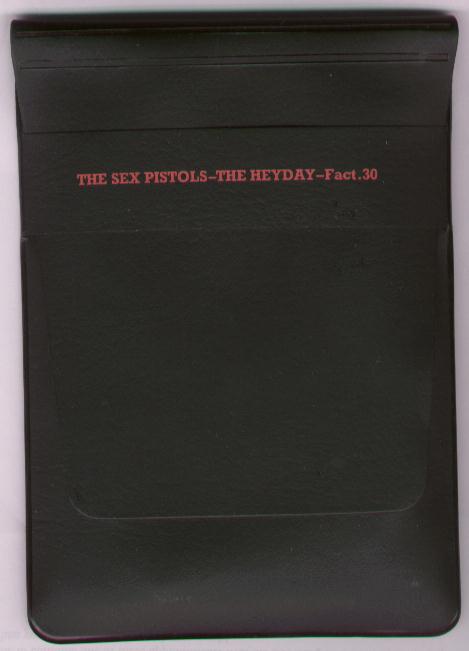 FACT 30, The Sex Pistols, The Heyday

* - listed, but not on cassette

~ Would everyone please wash their hands before...

Cassette label states 'A Factory Records Documentary Cassette', misc credits, and the pseudo-matrix message above. Gold cassette (also issued in grey or white) with black label and red printing, packaged in a black vinyl pouch with red printing, some including a Factory Christmas card. (Xmas card: "From the city that brought you "Strangeways". Seasonal Greetings and a seasoned cassette. Love Factory." With Fractured logo.).

Rumoured to have also been issued as a red on purple satin pouch.

The Factory Records Shareholder's statement states: "The Heyday interview tapes by Judy Vermorel, mid '77. Should retail around £3.00. Can be taken as capitalist surge (if you don't know the unit cost) or cultural rehabilitation... or ghetto crawling. 5,000 done for mid December release. Plus advert. Factory Records is this year having no party, sending no cards, and giving no presents. Instead we are taking an ad...Happy Christmas.Cassette, pronounced cASS-ette.(M.Mac)".

The NME 20/12 1980 included one full white page advert with a small picture of the Heyday cassette reading: "The Sex Pistols, Heyday, a documentary cassette, 2.99£." (No Factory designation or logo in ad.)

A CD version of the tape was issued by LTM in 2003 and includes the missing Malcolm McLaren's grandmother (Rose Corre).