A Certain Ratio > Live at Electrowerkz 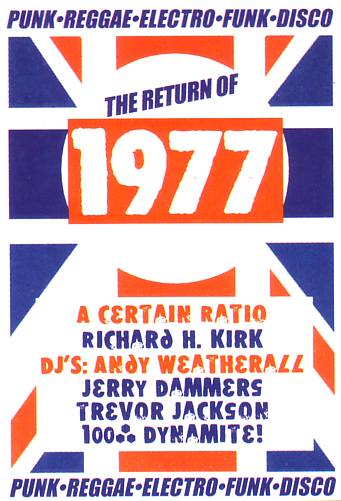 Back of flyer shown left 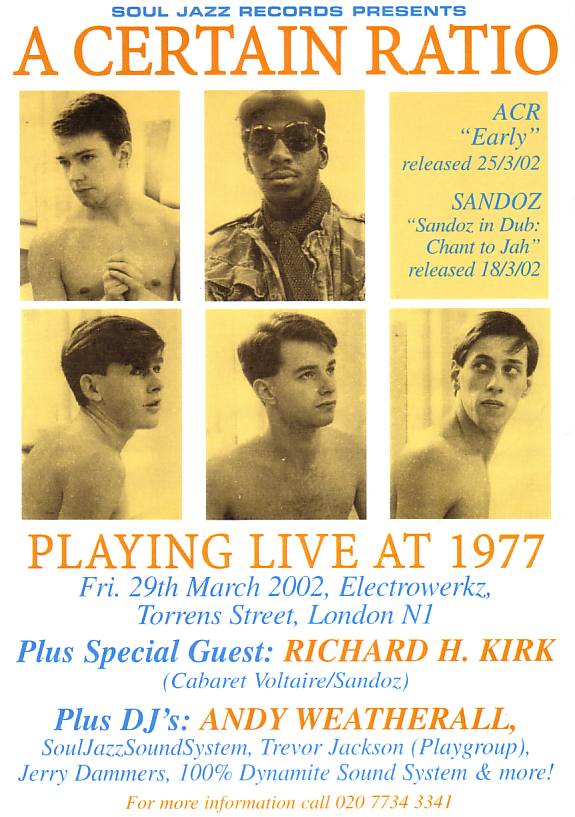 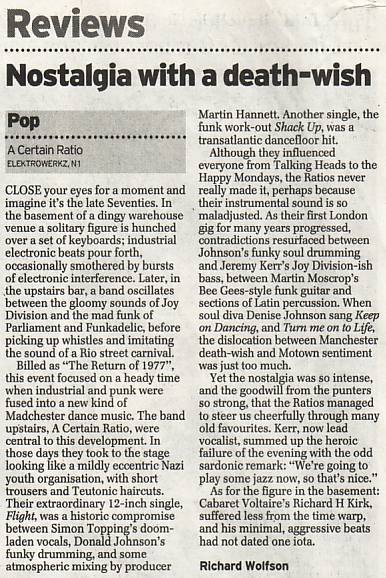 CLOSE your eyes for a moment and imagine it's the late Seventies. In the basement of a dingy warehouse venue a solitary figure is hunched over a set of keyboards; industrial electronic beats pour forth, occasionally smothered by bursts of electronic interference.

Later, in the upstairs bar, a band oscillates between the gloomy sounds of Joy Division and the mad funk of Parliament and Funkadelic, before picking up whistles and imitating the sound of a Rio street carnival.

Billed as "The Return of 1977", this event focused on a heady time when industrial and punk were fused into a new kind of Madchester dance music. The band upstairs, A Certain Ratio, were central to this development.

In those days they took to the stage looking like a mildly eccentric Nazi youth organisation, with short trousers and Teutonic haircuts. Their extraordinary 12-inch single, Flight, was a historic compromise between Simon Topping's doom-laden vocals, Donald Johnson's funky drumming, and some atmospheric mixing by producer Martin Hannett. Another single, the funk work-out Shack Up, was a transatlantic dancefloor hit.

Although they influenced everyone from Talking Heads to the Happy Mondays, the Ratios never really made it, perhaps because their instrumental sound is so maladjusted. As their first London gig for many years progressed, contradictions resurfaced between Johnson's funky soul drumming and Jeremy (Jez) Kerr's Joy Division-ish bass, between Martin Moscrop's Bee Gees-style funk guitar and sections of Latin percussion.

When soul diva Denise Johnson sang Keep on Dancing, and Turn me on to Life, the dislocation between Manchester death-wish and Motown sentiment was just too much.

Yet the nostalgia was so intense, and the goodwill from the punters so strong, that the Ratios managed to steer us cheerfully through many old favourites. Kerr, now lead vocalist, summed up the heroic failure of the evening with the odd sardonic remark: "We're going to play some jazz now, so that's nice."

As for the figure in the basement: Cabaret Voltaire's Richard H Kirk, suffered less from the time warp, and his minimal, aggressive beats had not dated one iota.

From the Daily Telegraph